The film, accompanied by my score A-Listers, tells the story of Southampton local Anil Sood. Anil is well-known in Southampton for running a dance music record shop and drum’n’bass events in the 1990s and 2000s. Through an interview Anil tells the stories of highs and lows; most recently having to close his latest business during the pandemic. The film brings together my music, archive material, interview footage and animation to interpret Anil’s story.

Also on the bill is my ‘Too Many Sweets (when Dorothy met Blake) for toy pianos and electronics.

On 22 July 2022 London Sinfonietta are staging an event in Southampton, UNTOLD STORIES, to screen the premiere of ANIL SOOD. I collaborated with the amazing artist Alys Scott-Hawkins on this project, writing a piece for piano and electronics, A-Listers, that Clíodna Shanahan recorded back in July 2021. Alys used the recording of this piece to make a super cool film. The music and film explore the life of Anil Sood, who we both met when he ran our local DIY store. Anil is an amazing person, who ran (and runs) drum’n’bass events as PARADOX. Following this premiere the film will be available on Youtube.

Clíodna Shanahan will also perform the UK premiere of my Too Many Sweets (when Dorothy met Blake) for toy pianos and electronics. The rest of the programme features a great piece by Julia Wolfe, East Broadway, and Steve Reich’s seminal Electric Counterpoint.

Alys Scott-Hawkins and I will be interviewed by Zoe Martlew as part of this London Sinfonietta online event streamed live from Kings Place. This hour-long programme lets you peek behind the curtain of our upcoming concerts and digital work, hearing directly from the composers we work with, getting exclusive previews of performance films yet to be released on the London Sinfonietta Channel, and watching a very special live performance.

Was really great to have the London Sinfonietta down to visit Southampton last week to undertake the recording of my newest piece A-Listers for piano and electronics. Clíodna Shanahan was in the Steinway recording hot seat and was fantastic to work with her and Adam Flynn from the Sinfonietta who was engineering. My collaborator on this London Sinfonietta Community Commission, artist Alys Scott-Hawkins, will work with the recording, animation and archive footage to make a film for release later this year or early in 2022. Both the music and film interpret the story of Anil Sood, who is well-known in Southampton for running a dance music record shop and drum’n’bass events in the 1990s and 2000s.

Back in 2015 I wrote a piece with the amazing poet Luke Wright for the London Sinfonietta, which we performed at Queen Elizabeth Hall. It was a great experience and I’m delighted that our collaboration will continue as we develop a new piece for, and with, Riot Ensemble over the coming year or so. The first stage of development is 2 days together in mid-September to try out some ideas and get things moving. This will happen at my stomping ground at the University of Southampton and is possible thanks to Riot Ensemble’s Arts Council funding and some support from the University. Big thanks to Aaron Holloway-Nahum for believing in the project and being so supportive.

Exciting to see what happens!

In 2017 I made a postcard for the London Sinfonietta for their 50th Anniversary celebrations. In the exhibition my card appeared between George Benjamin and Steve Reich… not too shabby.

Last year the London Sinfonietta asked me to make a postcard piece for their 50th birthday, which just meant the piece had to fit onto one side of a postcard. Here is the postcard and below is a short electronic version I made of the piece to demo how it could work: 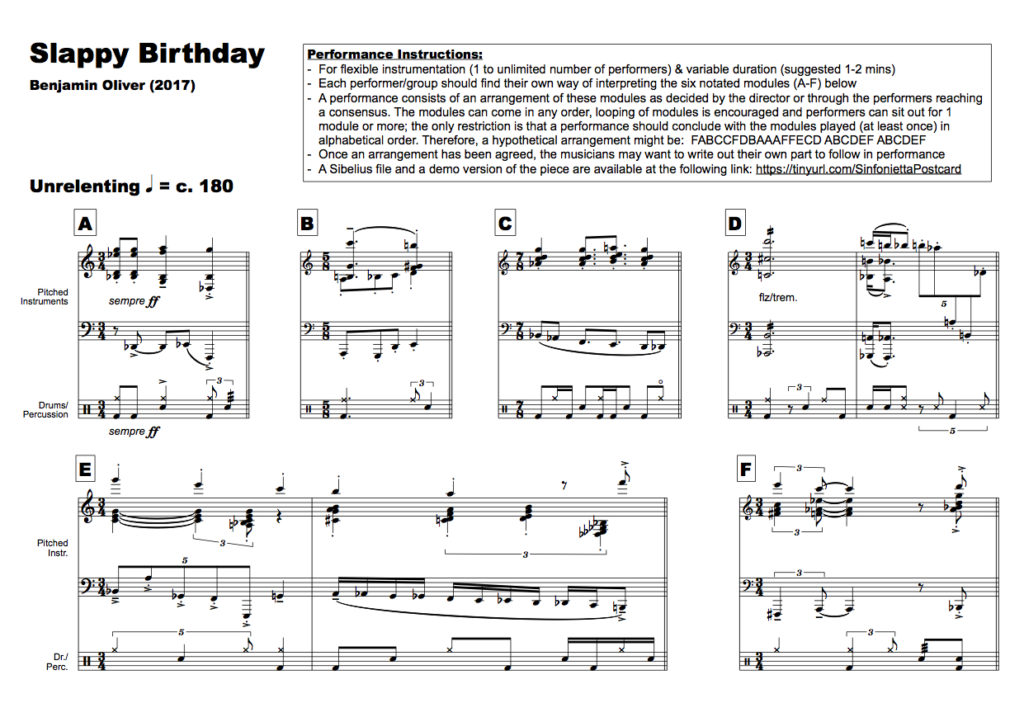 Was great to hear Owen Gunnell premiere my new piece for solo percussion, Changing Up, yesterday at one of London Sinfonietta’s ‘World Premiere Wednesday’ events. 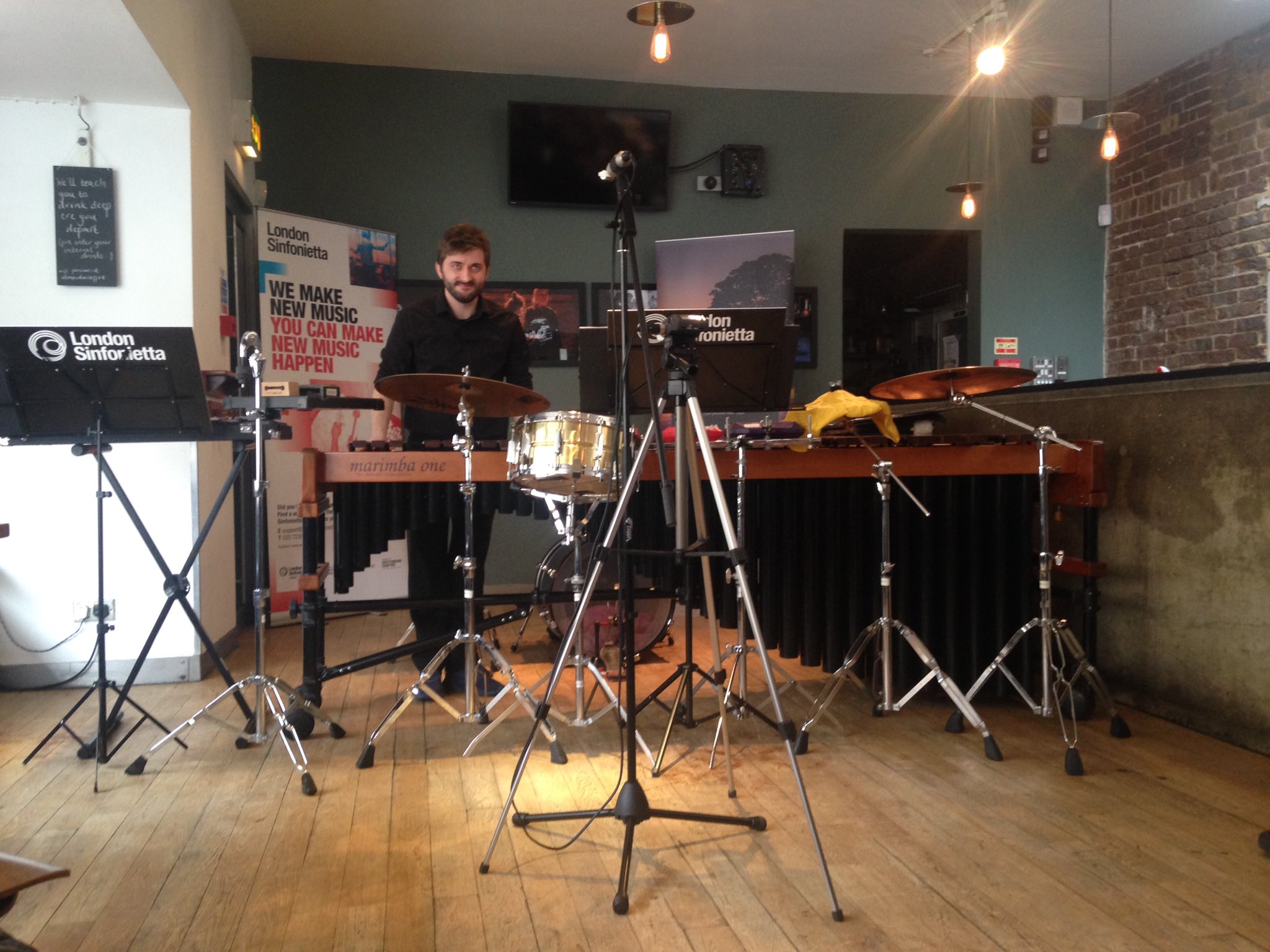