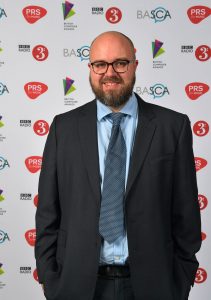 Benjamin Oliver is a composer, conductor, electronic musician and pianist. Around sixty of his works have been performed by performers including Ensemble Paramirabo, London Sinfonietta, Yshani Perinpanayagam and the BBC Symphony Orchestra. Ben is an Associate Professor in Composition at the University of Southampton and conductor of the Workers Union Ensemble.

Things some people have said:

“Brilliant translation: science to music… One of the best pieces of scientific performance art I’ve ever seen/heard. Incredibly intellectually rewarding. Wonderful!”
Audience member feedback on The Virus Within: Hearing HIV

“…a wonderful new piece by Benjamin Oliver…which sounded a little like King Crimson’s Robert Fripp guesting with the Young Marble Giants.”
Keith Bruce on Extending from the inside for solo theorbo

“I loved your piece. Well, loved in the sense of taking pleasure in music sometimes so frightening it makes you feel like there are maggots in your stomach trying to eat their way out.”
Yshani Perinpanayagam on Lullaby for Joni

“From the Sublime to the Ridiculous…wryly exploits time-honoured pianistic gestures and flourishes. It’s closing chord is unexpectedly poignant.”
Paul Conway in Music Opinion

“He must have been drunk when he wrote this.”
Overheard Deal Festival audience member on Piano Trio (with whistles)

@roddymusic Been there although less shaming and more pressure