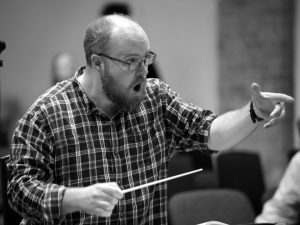 Benjamin Oliver (b. 1981) is a composer of, in the main, contemporary instrumental music. More than sixty of his works have been performed, his music has been broadcast on BBC Radio 3, recorded and released by labels including Linn and Prima Facie, and his piece ‘Loop Concerto’ was nominated in the Contemporary Jazz category of the British Composer Awards 2017. His musical ideas often contain loops that reference jazz and other riff-based music but are combined, or offset by, a fascination with mechanical devices and systematic processes. He is Associate Professor in Composition and Head of the Department of Music at the University of Southampton and conductor of Workers Union Ensemble. 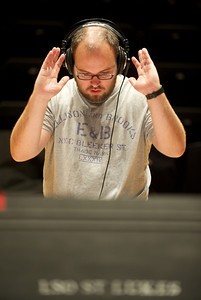 Benjamin Oliver is a composer, conductor, electronic musician and pianist. He was born in 1981 and grew up in Chatham, Kent, in the UK. He completed his AHRC and PRSF funded DPhil in Composition, supervised by Sam Hayden, at the University of Sussex in 2010. Ben composes, in the main, contemporary instrumental music. More than fifty of his works have been performed and his music has been broadcast on BBC Radio 3. His musical ideas often contain loops that reference jazz and other riff-based music but are combined, or offset by, a fascination with mechanical devices and systematic processes. He is Associate Professor in Composition at the University of Southampton.

Ben was chosen as one of the winners of the International Composer Pyramid (ICP) 2010 and 2011, set-up by the Sounds New Contemporary Music Festival, UK, with Coups de Vents, France. His piece was voted best in the audience votes in both England and France in the ICP 2012. He was one of Sound and Music’s New Voices 2014 and is a former LSO Soundhub Associate Composer and was nominated in the Contemporary Jazz Category of the British Composer Awards 2017. 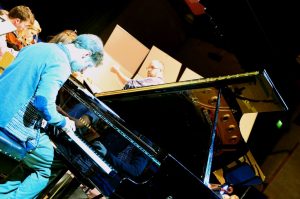 As conductor of Workers Union Ensemble Ben has directed the premiere performances of numerous works by many young (and older) composers and recorded works by Joe Cutler for NMC and Matthew Kaner for BBC Radio 3. He has also worked with a range of professional, youth, amateur and student ensembles and orchestras including Performing Arts Collaboration South, London Sinfonietta, Kent County Youth Orchestra and University of Leeds Union Symphony Orchestra. Since 2014 he has directed numerous major projects at the University of Southampton that bring together professional and student musicians, including the premiere of Michael Finnissy’s Remembrance Day, and performances of seminal works by Steve Reich, Lois V. Vierk and Richard Ayres.

He lives in Bitterne Park, Southampton, with his family and dog, Peggy.

Bit late to the sharing party but here’s my piece ‘the clouds were beneath me’ for Flute and Harp! It was a wonderful experience to be a part of @PsapphaEnsemble scheme, met some incredible composers and was great working with Lauren and Conrad! 🎶✨ youtu.be/Kj0NACYbG5o

It’s out!! New film, ANIL SOOD, by Alys Scott-Hawkins featuring new piece, A-listers, by me. Played by @CliodnaShanahan, mixed by @Drew_soundslike, synth built @PROTODOME Big thanks to @Ldn_Sinfonietta and especially Anil for sharing his story… twitter.com/Ldn_Sinfoniett…